“Hey Nia Sharma, that is ok. Forgive me too if I have hurt you though that wasn’t my intention at all,” said Devoleena Bhattarcharjee 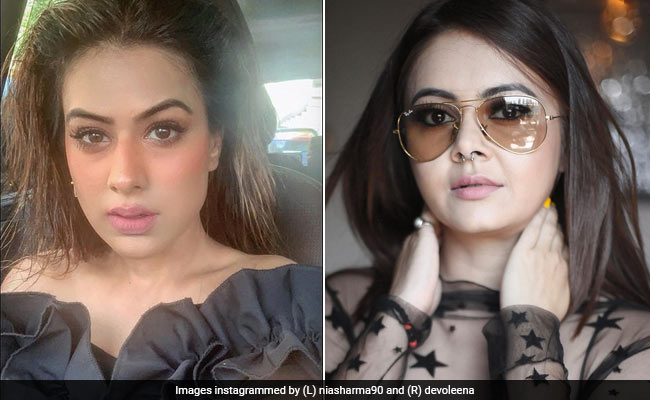 The blow-up between actresses Nia Sharma and Devoleena Bhattacharjee turned out to be a storm in a tweet cup with an exchange of apologies after a brief Twitter war on Tuesday. Yesterday, the TV stars hurled snide remarks at each other on Twitter over their differences in opinion about rape allegations against colleague Pearl V Puri. Both Devoleena and Nia Sharma have deleted their tweets now and replaced them with honest apologies. “Ending where it started! ‘Sorry’ once again,” tweeted Nia and attached this statement addressed to Devoleena to her post. “My mom, brother and Ravi very lovingly told me I wasn’t right and considering three close ones can’t be wrong, so here I go… Hey Devoleena, I may have crossed a line in being personal. I am sorry. It was impulsive. Hope you’ll forget it.”

Replying to Nia, Devoleena tweeted a redone version of a Dilwale Dulhaniya Le Jayenge dialogue: “Seems like never started. As I said badi badi sehero mein choti choti ladayee hoti rehti hai (Minor fights keep happening in big cities).” Responding to Nia’s Instagram story, Devoleena also asked for forgiveness: “Hey Nia Sharma, that is ok. Forgive me too if I have hurt you though that wasn’t my intention at all. Convey my regards to your mom, brother and Ravi. Stay safe and take care.”

@Devoleena_23
Ending where it started! ‘Sorry’ once again. ❤️ pic.twitter.com/i9lnhoNPFw

On Tuesday, Devoleena issued a few strongly-worded tweets addressed to those who were questioning the credibility of the alleged rape survivor, a minor. It triggered Nia Sharma who tweeted back a putdown.

Last week, actor Pearl V Puri was arrested by the Mumbai police for allegedly raping a minor after the father filed a complaint. Pearl V Puri is currently in police custody; several of his colleagues from the TV industry have written posts saying they believe he is innocent.

“If Some Workers Get Covid…” AAP Shocker On Minimum Mask Use...

Mehul Choksi Captured In Dominica While Trying To Flee To Cuba:...