Kriti Sanon, who made her debut in the 2014 film Heropanti, completed 7 years in Bollywood today 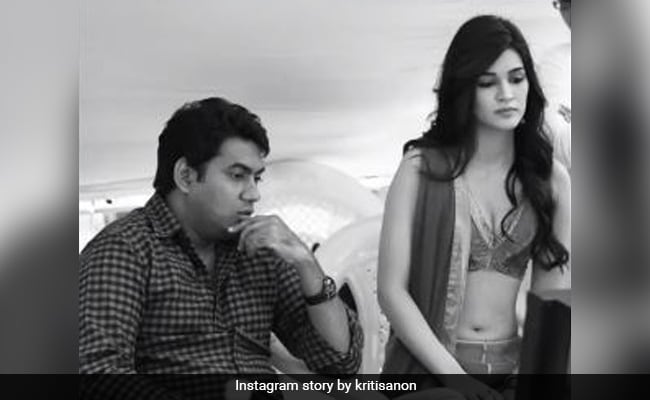 An unseen picture of Kriti Sanon from her audition days has caught our attention on social media. We found the picture on Kriti’s Instagram handle and we must say that it is a treat for her fans. Kriti, who made her debut in the 2014 film Heropanti, completed 7 years in Bollywood today. On Sunday, the actress posted a throwback picture from the sets of Heropanti on her Instagram story in which she can be seen looking at the monitor screen. Kriti is sitting beside Heropanti director Sabbir Khan who gave her a big break in Bollywood. We couldn’t ignore Kriti’s innocent look in the frame.

Kriti also wrote a caption along with it. In her caption, the Luka Chuppi actress shared an anecdote with her fans saying that she signed Heropanti on the same day when she auditioned for the 2014 film. “My audition day which was also the day I signed the film,” the text on her Instagram story read. Tagging director Sabbir in her post, Kriti added, “Why do you look so doubtful?”

Kriti has been sharing a lot of memories of her first film Heropanti on her Instagram stories, as it has also completed 7 years of its release today. Take a look at her posts here.

Kriti combined these pictures in a montage and posted the video on the platform as she remembered her journey in Bollywood. The actress wrote a heartwarming note in the caption. Kriti called her journey, “beautiful” and the “best phase” of her life. She wrote, “7 Years of Heropanti, 7 Years in the industry, 7 years of Loving what I do.. Its been a beautiful journey so far, the best phase of my life…These pictures bring back so many memories.. Missing you guys more today.”

Meanwhile, Tiger Shroff, who also made his acting debut in Heropanti, posted a stunning picture with his co-star Kriti on his Instagram story. Wishing Kriti, Tiger wrote, “Happy 7 years Kriti. May you continue to rise and shine every year. See you on set soon.”

For the uninitiated, Tiger and Kriti are now reuniting after many years for Heropanti 2, the second installment of the Heropanti franchise. Both of them will also be seen in another upcoming film Ganpat.

Kriti Sanon has also worked in films such as Bareilly Ki Barfi, Luka Chuppi, Dilwale, Housefull 4, Raabta and Panipat to name a few. Apart from Heropanti 2 and Ganpat, Kriti now has films like Mimi, Bachchan Pandey, Bhediya and Adipurush coming up.