“When our allies shoulder their fair share of the burden, they’ll reasonably expect to have a fair say in making decisions,” Blinken said at NATO headquarters in Brussels. 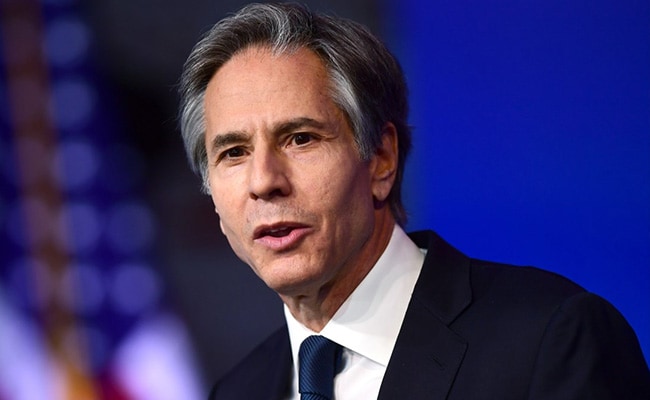 “The United States won’t force our allies into an ‘us-or-them’ choice with China,” Blinken said. (File)

US Secretary of State Antony Blinken on Wednesday vowed a new approach to work closer with allies, promising Washington would not force them to take sides against China.

“When our allies shoulder their fair share of the burden, they’ll reasonably expect to have a fair say in making decisions,” Blinken said at NATO headquarters in Brussels.

“We will honour that — that begins with consulting our friends, early and often.”

The wide-ranging speech on his first official trip to Europe marked a dramatic shift under President Joe Biden from the combative approach of predecessor Donald Trump.

It comes a day before Biden will join a video summit with EU leaders to press home the message that his administration wants to rebuild transatlantic ties.

Biden is keen to take a multilateral approach as he looks to enlist NATO allies and the EU in a united front of democracies to the authoritarian challenge of China.

“The United States won’t force our allies into an ‘us-or-them’ choice with China,” Blinken said.

“But that doesn’t mean countries can’t work with China where possible, for example on climate change and health security.”

The US and EU took a first step towards joint action against Beijing by unveiling synchronised sanctions on Monday over the crackdown on the Uyghurs in China.

But Brussels irritated Biden’s team by agreeing an investment deal with Beijing weeks before he took office.

Blinken said Washington wants to work with partners to “close the gaps in areas like technology and infrastructure, where Beijing is exploiting to exert coercive pressure.”

“We will rely on innovation, not ultimatums,” he said.

The US is also seeking to stand together with allies in the face of a more assertive Russia.

On the contentious issue of defence spending, Trump repeatedly harangued wealthy NATO members like Germany to reach a target of two percent of gross domestic product.

Blinken said this goal remained “crucial”, but softened Washington’s approach by admitting that allies could “shoulder their share of the burden in different ways”.

“No single number fully captures a country’s contribution to defending our collective security,” he said.

There appeared also to be a message for NATO members such as Turkey where the government has been accused of clamping down on the opposition and rights.

“We all must speak up when countries take steps that undermine democracy and human rights,” Blinken said.

“And we must help those countries move back in the right direction, by strengthening the guardrails of democracy.”

At an earlier bilateral meeting, Blinken pressed Turkey’s foreign minister over Ankara’s purchase of a Russian air defence system, withdrawal from a treaty on violence against women, and rights record.

Biden’s administration is still formulating its overall approach to Ankara — but it maintains that it sees the country as an important ally that it wants to keep firmly in NATO.