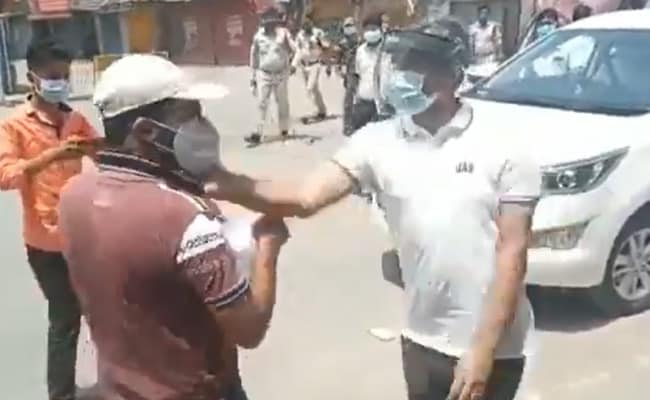 A man who was going to buy medicines was slapped by a district official and thrashed by policemen amid the COVID-19 lockdown in Chhattisgarh’s Surajpur. Visuals of the incident were shared widely on social media.

The police later said a case has been filed against the man, Sahil Gupta, for speeding.

The official then instructs some policemen to thrash the man. The district collector is also heard scolding the man for recording the incident in video.

The police said a First Information Report has been filed against the man for speeding and not stopping his two-wheeler despite being told to do so.

The district collector later said he had “no intention to disrespect or belittle the person in the video”.

“Today, a video is viral on the social media in which I am shown slapping a man who was out during lockdown. I sincerely apologise. I never had any intention to disrespect or belittle the person in the video,” Mr Sharma said.

“In this pandemic situation, district Surajpur along with entire Chhattisgarh is facing irreparable loss of life. We government employees of the state government are striving hard to tackle this problem. My parents and I were also affected by coronavirus. I am now post-Covid but mother is still positive and undergoing treatment at home,” the district collector said.

“Also, that person in the video is not a minor as mentioned in many social media platforms,” Mr Sharma said.