Maxwell Berry, 22, was taken into custody at Miami International Airport on Sunday and charged with three counts of battery, reports said. 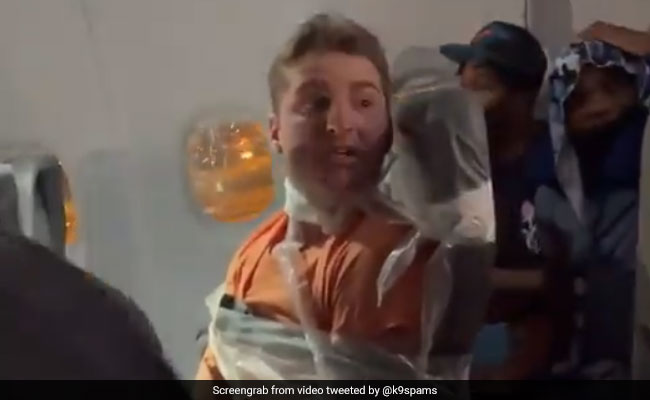 Maxwell Berry was restrained to his seat by the crew using duct tape.


An American man has been arrested after being accused of groping two flight attendants and punching a third on a Frontier Airlines flight from Philadelphia to Miami before being taped to his seat, US media reports said this week.

Maxwell Berry, 22, was taken into custody at Miami International Airport on Sunday and charged with three counts of battery, NBC and NPR reported.

Berry is accused of groping the breasts of one flight attendant, touching the buttocks of a second and punching a third in the face, NBC reported.

According to NPR, he was caught on camera shouting at the flight crew and other passengers: “My parents are worth more than f****** 2 million goddamn dollars!”

A video of the incident also shows Berry taking a swing at a male flight attendant during a physical altercation and passengers laughing as he continues to scream.

The video later shows the same male flight attendant securing Berry to his seat, using duct tape, as passengers laugh and cheer in the background.

The clip, posted on Twitter by an ABC News journalist, has been viewed over 12 million times. Warning: the video contains profanity.

Frontier passenger allegedly touched 2 flight attendants breasts, then screamed his parents are worth $2 million, before punching a flight attendant. Frontier suspended the crew for duct taping the passenger to his seat as they landed in Miami. 22 yr old Max Berry is in custody. pic.twitter.com/4xS9Rwvafx

Another video posted by a Twitter user who identified as a passenger on the flight has been seen over 3 million times.

#frontier#frontierairlines crazy it happened right beside, me it’s crazy out here pic.twitter.com/YdjURlSb5p

Frontier’s action over the incident has also drawn scrutiny with the airline first announcing it had suspended the crew since they had not followed “proper policies for restraining a passenger”.

Facing a backlash, the airline reportedly retracted the statement saying it was “rushed” and added the crew had been sent on paid leave according to the rules pending an investigation.

“Frontier Airlines maintains the utmost value, respect, concern and support for all of our flight attendants, including those who were assaulted on this flight,” an airline spokesperson said in a statement.

US Won’t Force Allies To Take Sides Against China: US Secretary...