“Pakistan should not, and Afghanistan should be…” Mr Biden can be heard saying to reporters before the Easter Bunny approaches. 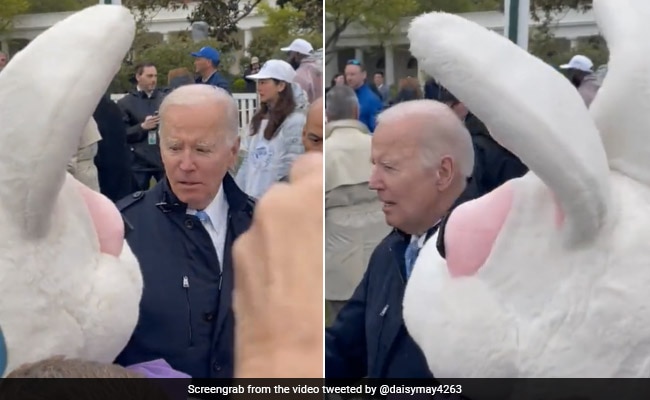 US President Joe Biden was ushered away from the reporters.

US President Joe Biden was discussing foreign policy at the White House Easter Egg Roll on Monday when an Easter Bunny – a White house press aide (according to New York Post) – interrupted his conversation, leading him away from the reporters. A video of the bizarre incident has taken the internet by storm, in which Mr Biden can be heard answering a question on Afghanistan and Pakistan.

Take a look at the video below:

Appears Biden’s minders are now dressing up in costume.

Biden is quickly interrupted by the Easter Bunny after he starts to comment on Afghanistan and Pakistan pic.twitter.com/VpgeNKzsMB

In the video, the Easter Bunny can be seen giving Mr Biden a big wave to usher him away while the US President is caught off guard. Mr Biden jerked his head off toward the Bunny in apparent shock and took a step away, while the Easter Bunny enthusiastically waved its stuffed paws as though trying to get the attention of someone very far away, even though only around 18 inches separated the two.

According to Fox News, the US President was ushered away from the reporters because he reportedly needed to kick off another round of the egg-rolling competition by blowing a whistle.

Ever since the video surfaced on the internet, the US President’s opponents from the Republic Party have mocked the silly moment. Senator Josh Hawley’s press secretary Abigail Marone wrote, “Why is the Easter Bunny directing the President of the United States.” Former California House candidate Buzz Patterson also commented, “Some staffer in a bunny outfit interrupts the most important person in the world. Only in Biden’s America.”

Meanwhile, it is to mention that this is not the first time that the US President was caught in a bizarre moment. Earlier this month, Mr Biden appeared to turn to shake someone’s hand after a speech even though there was no one on the stage beside him. He also looked lost on the stage and strangely turned his back to the audience as his speech ended in North Carolina.