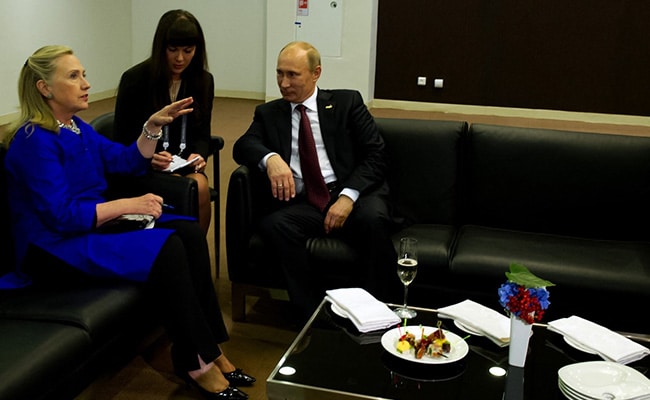 Hillary Clinton shared her brief experience of working with Mr Putin from 2009 to 2013. (AFP File Photo)

Russian President Vladimir Putin has an almost “messianic belief” in himself, former US secretary of state Hillary Clinton has said. She was speaking to an audience at the Hay Festival of Literature and Arts, according to The Guardian.

She added that Mr Putin does not like critics, especially if they are women, the publication further said.

Speaking to civil liberties advocate Helena Kennedy, Ms Clinton shared her brief experience of working with Mr Putin from 2009 to 2013, when he was the prime minister of Russia.

The 2016 US presidential election candidate said that her relationship with Mr Putin turned sour when he returned as Russia’s President.

“Putin does not like critics, especially women critics. Putin then became very adversarial toward me with few exceptions. As we know, despite efforts to say to the contrary, he worked very hard to get Trump elected through all kinds of means,” Ms Clinton was quoted as saying by The Guardian.

Ms Clinton said she had witnessed Putin’s “almost messianic belief in himself and what he was destined to be” as well of his “goal of restoring imperial Russia” while working with him.

“When he invaded Ukraine, I was sadly not surprised. I was very pleasantly surprised at how effective the government of Zelensky and Ukraine defended themselves,” she further said.

The Ukraine war entered its 100th day today with Russian forces pressing deeper into the eastern Donbas region after being driven back from the cities of Kyiv and Kharkiv.

“This war has and will have no winner. Rather, we have witnessed for 100 days what is lost: lives, homes, jobs and prospects,” UN Assistant Secretary-General Amin Awad said in a statement.

Since Russia’s February 24 invasion, thousands of people have been killed and millions forced to flee. On the battlefield, up to 100 Ukrainian soldiers are dying every day, according to Mr Zelensky.