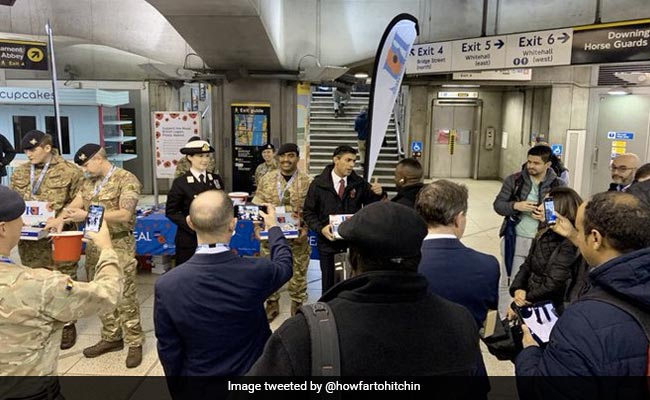 British PM is seen talking to commuters while holding a tray full of poppies.

Britain’s Prime Minister Rishi Sunak joined Army members and civil servant Stephen le Roux to collect funds for the Royal British Legion’s (RBL) annual Poppy Appeal, and a video of his appearance is going viral. Mr Sunak reached the venue at 8am on Thursday. During the brief appearance, he was seen talking to members of the public and holding a tray full of poppies.

“Good to see the Prime Minister, @RishiSunak selling poppies for @PoppyLegion at Westminster tube station on my way into work this morning.” MP Andrew Stephenson wrote on Twitter.

Bought my Poppy from Rishi and asked for a receipt @MahyarTousipic.twitter.com/bQP8857Y0K

RBL said they were “grateful to the PM for generously giving up his time to collect with us during the morning rush hour”. Others were also quick to share their surprise over the Prime Minister’s appearance, reported the Telegraph.

According to the BBC, each year the Royal British Legion aims to raise 1 million pounds during London Poppy Day. This year’s events include an appearance from the charity’s ambassador, Ross Kemp, who will be rallying the troops on Horse Guards Parade alongside members of the Irish Guards.

“EastEnders star Shane Ritchie has also recorded announcements encouraging people to donate, which will be played out across the London transport network,” reported the news outlet.

Mr. Lewis, an operations and data analyst, was quoted by The Independent as saying that he bought a poppy from Sunak for 5 pounds. “I didn’t expect to meet the chap,” he said. “I went to buy my ticket at Westminster Station, and he was there selling poppies with the military men and women.”