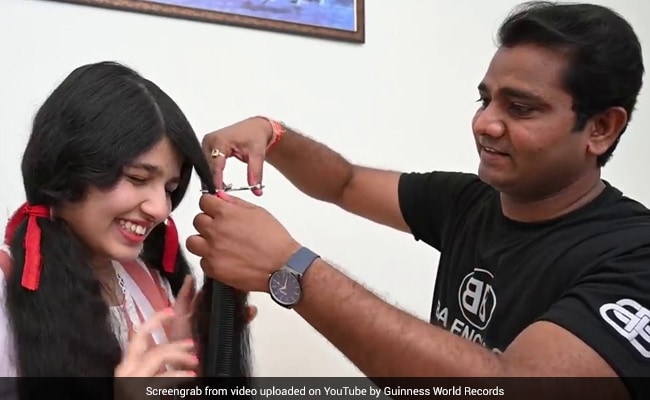 Nilanshi Patel got her hair cut after 12 years.


Nilanshi Patel from Modasa, Gujarat, got a haircut and a video of it is now going viral on the Internet. Why, you ask? This is because Nilanshi’s is no ordinary haircut. This is the first haircut she is getting in 12 years and the 18-year-old is saying goodbye to the tresses that fetched her three Guinness World Records. Her most recent record was in July 2020. With a length of 200 cm (6ft, 6.7 inch) hers was the longest hair on a teenager. She held records in the same category in 2018 and 2019 as well.

Now, Nilanshi has decided that it’s time to say goodbye to her long hair. Right before her haircut, she said, “I’m so excited and a little bit nervous because I don’t know how I will look in the new hairstyle. Let’s see what happens, but I hope it’s going to be amazing.”

According to a blog post by Guinness World Records, Nilanshi decided to grow and groom her hair after a bad experience at a hair salon. “I got my hair cut, a really bad haircut. So, then I decided that I won’t cut my hair. I decided that when I was six and have not cut it since,” she was quoted as saying.

Now that she was finally cutting her hair, she was faced with three options. She could auction it, donate it to charity for cancer patients, or donate it to a museum. Following consultation with her mother, she decided to donate the hair to a museum. Her mother told Nilanshi that the hair deserved to be in the museum as it would help inspire others. The mother, who also cut her hair along with Nilanshi, donated her locks to cancer patients.

In the video, Nilanshi kisses her hair after it has been chopped off. The overwhelmed mother-daughter duo can also be seen hugging each other. Looking in the mirror, Nilanshi says, “It is beautiful. I look like a princess. I am still Rapunzel….I love my hairstyle.”

Nilanshi hopes to inspire people and add more world records to her name.