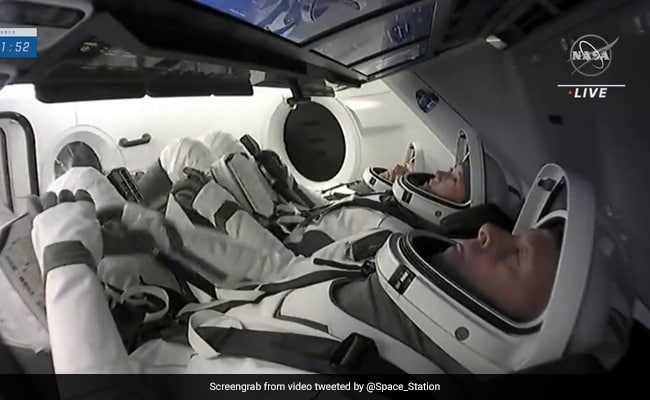 Still from a video shared on Twitter by the International Space Station.


SpaceX has launched its third crew to the International Space Station, recycling a rocket and spacecraft for the first time. Four astronauts, from the US, France and Japan, are now making their way to the International Space Station. A video shared by the ISS shows how the crew passed time before the launch, which was scheduled from pad 39A at NASA’s Kennedy Space Center in Florida at 5:49 am Eastern Time (0949 GMT).

The International Space Station tweeted a video of the four-member team playing Rock Paper Scissors before the launch. ISS said that the crew went through their steps ahead of schedule and found themselves with extra time on their hands- which they killed by playing the classic hand game.

“The crew is going through their steps ahead of schedule and are passing the extra time aboard the Crew Dragon spacecraft with a couple of rounds of the game,” The ISS wrote on Twitter.

The crew is going through their steps ahead of schedule and are passing the extra time aboard the Crew Dragon spacecraft with a couple of rounds of the game. pic.twitter.com/1MUSHQUnyi

The video has been watched more than 1.2 lakh times on the microblogging platform, where it has also garnered thousands of comments and reactions.

“Thought it would be Rock-Paper-Scissors-Spock-Lizard,” wrote one Twitter user, referring to a variation of the game invented by Sheldon Cooper in The Big Bang Theory.

“Ah heck, they’re going to space, get’ em a Nintendo Switch,” another said.

It is the third time SpaceX will send humans to the ISS as part of its multibillion dollar contract with NASA under the Commercial Crew Program.

The first mission launched last May and ended nine years of American reliance on Russian rockets for rides to the ISS following the end of the Space Shuttle program.

“In terms of getting the operations ready, it’s always easier the third time you do it,” Daniel Forrestel, a NASA launch integration manager, told AFP.

“I would never ever want to describe spaceflight as ‘routine,’ but ‘more familiar’ is a good way to put it,” he added.