Madhya Pradesh Coronavirus news: A couple in Ratlam got married in PPE suits after the groom tested positive for Covid-19. 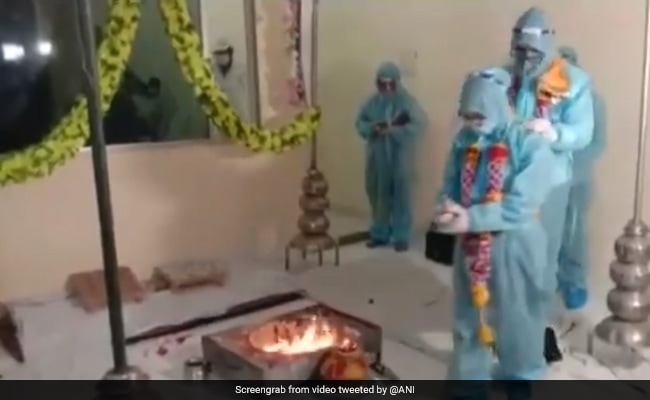 
A couple in Madhya Pradesh’s Ratlam got married in PPE suits on Monday after the groom tested positive for Covid-19. The video shows both the bride and the groom, and three others in full protective suits at the wedding ceremony. Mantras for pheras can be heard in the background as the couple goes around the fire. “The groom tested positive on April 19. We came here to stop the wedding but on request and guidance of senior officials, the wedding was solemnized. The couple was made to wear PPE kits so that the infection doesn’t spread,” Navin Garg, the Tehsildar of Ratlam was quoted by ANI as saying.

Gatherings for social and religious purposes have been restricted in Madhya Pradesh and in states across India, to stop the spread of the pandemic. A maximum number of guests allowed at wedding functions stands at 50, according to the state government guidelines.

On Monday, a top police official of Bhind in Madhya Pradesh came up with a novel idea to get people who host wedding functions in his jurisdiction to adhere to Covid gidelines. The bride and the groom at wedding functions that have 10 or less guests will be treated to a dinner at home, Superintendent of Police, Bhind, Manoj Kumar Singh told news agency Press Trust of India.

“I am going to treat the bride and the groom if they get married in the presence of ten or less than ten guests to delicious dinner at my home,” the senior officer said, adding that “such couples will be given mementos for adhering to Covid guidelines, and a government vehicle will be sent to pick up and drop them home.”

In a bid to flatten the curve and spiralling Covid cases, the central government has put out guidelines for states on enforcing lockdowns and containment zones.

According to the rules, restrictions must be put when the positivity rate is 10 per cent or more for a week and when more than 60 per cent hospital beds are occupied. States have also been urged to go for an intensive, local and focused containment network in districts.