“Congratulations Tigress of Bengal,” he tweeted after Ms Banerjee’s Trinamool Congress (TMC) surged way ahead the BJP in the counting of votes currently underway. 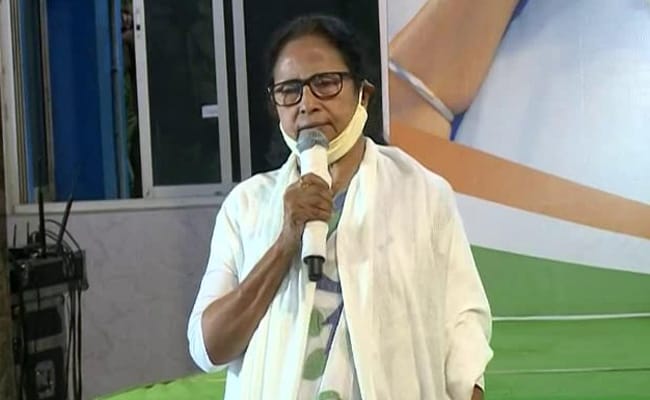 As the TMC is set to retain power in West Bengal, the Shiv Sena on Sunday said Mamata Banerjee’s win in her state is “victory of democracy” in India and the result would give a new direction to national politics.

“Congratulations Tigress of Bengal,” he tweeted after Ms Banerjee’s Trinamool Congress (TMC) surged way ahead the BJP in the counting of votes currently underway.

As per the latest trends, the TMC was ahead in 202 of the 292 seats that went to polls in West Bengal, way over the halfway mark of 147, leaving the BJP trailing far behind in 82 seats.

Talking to reporters, Mr Raut said, it was not easy to defeat Ms Banerjee, even though the BJP worked hard and invested a lot in the West Bengal polls.

“People of Bengal voted for Bengal’s pride and image. They voted fearlessly. The country is looking at Ms Banerjee with hope. She fought like a wounded tigress. Her victory is a victory of democracy in India and the result would give a new direction to national politics,” he said.

“We have to compliment Mamata didi that she accepted the BJP’s challenge and contested only from one seat,” he said.

We have no doubt that her party will form the next government in West Bengal, the Shiv Sena’s chief spokesperson said.

He said when the country was facing a pandemic, the country’s top leadership stayed put in a state for several weeks to defeat a woman.

“All attempts were made to destroy her party, but she fought hard. Central investigating agencies were pitted against her,” Mr Raut alleged.

The BJP worked hard in Bengal and the top leadership’s prestige was at stake, he said, adding that the BJP showed how to strategise and win elections.

“But they tried and lost. Violating all COVID-19 norms, the BJP focused on the show of strength, road shows and massive rallies,” Mr Raut said.

But Ms Banerjee is a grassroot leader and she defeated all of them, he said. She has proved that the high-handedness of Delhi will not be tolerated. People of states will decide whom to hand over their state for ruling, he said.

Mr Raut said he called up Ms Banerjee to congratulate her on her win. “(Maharashtra Chief Minister) Uddhav Thackeray is also pleased about Banerjee”s win,” he said.

He alleged that due to the poll rallies in Bengal, the coronavirus spread rapidly.

“We were fighting to defeat coronavirus and the centre was fighting to defeat Mamata Banerjee. Prime Minister Narendra Modi ignored COVID management to focus on Bengal polls. When PM concentrates so much on assembly polls and the party loses, it is not good,” he said.

He said everyone was now more worried about the rising COVID-19 numbers than the political numbers.

“We are paying the price for the election campaigning. It is time to introspect and to do that also we need oxygen,” he said.

The Shiv Sena, which shares power in Maharashtra with NCP and Congress, did not contest the West Bengal polls, but extended its support to Ms Banerjee.

The trends indicated that Tamil Nadu’s ruling AIADMK could cede power to arch rival DMK. In the Union Territory of Puducherry, the AINRC-led NDA was headed towards power.

Talking about it, Mr Raut said except for Puducherry and Tamil Nadu, there will be no change in political scenario in the other states.

To a question on the loss of Maharashtra Ekiran Samiti (MES) candidate in the Belgaum Lok Sabha bypoll, he said, “The opportunity was to prepare for the assembly polls in future. Marathi people had united in Belgaum,” he said.

“Your Visa Should Be Cancelled”: Mamata Banerjee On PM’s Bangladesh Trip