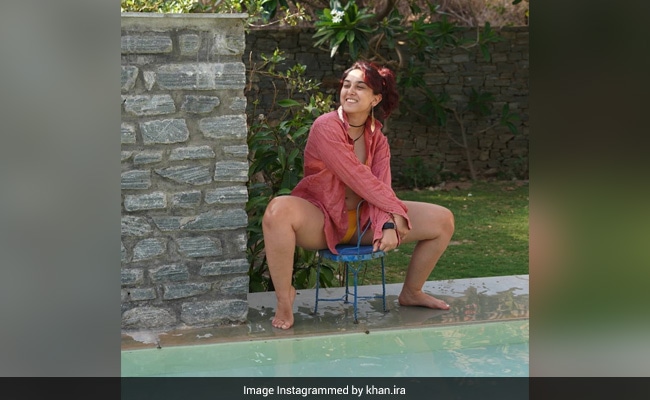 Ask Aamir Khan’s daughter Ira “what do chair, stairs and trees have in common” and she will say only one thing – “they’re all meant to be sat on.” Ira Khan, on Friday, shared two pictures of herself spending some quality time by the pool and captioned them in her own unique way. In the pictures, Ira Khan can be seen sitting on a very tiny chair in an orange bikini and pink shirt. “I was dared that it wasn’t a real chair,” she wrote in the caption and added: “All chairs are real chairs! They’re all meant to be sat on!” She also accompanied her post with hashtags like #chair #stairs #tree #whatdotheyhaveincommon #meanttobesaton.

Ira Khan made her relationship with boyfriend Nupur Shikhare Instagram official on Valentine’s Day. She posted a couple of pictures of herself and Nupur Shikhare and wrote: “It’s an honour to make promises with and to you” with a red heart icon and added: “#hi #whaleyoubemine #myvalentine #buddy #yourebetteratcheesylines #dreamboy.”

Ira is the younger of Aamir Khan’s two children with his first wife Reena Dutta. The actor is now married to filmmaker Kiran Rao, with whom he has a son named Azad.

Ira made her directorial debut with a theatrical adaptation of Euripides’ Medea, which starred Hazel Keech in the titular role.