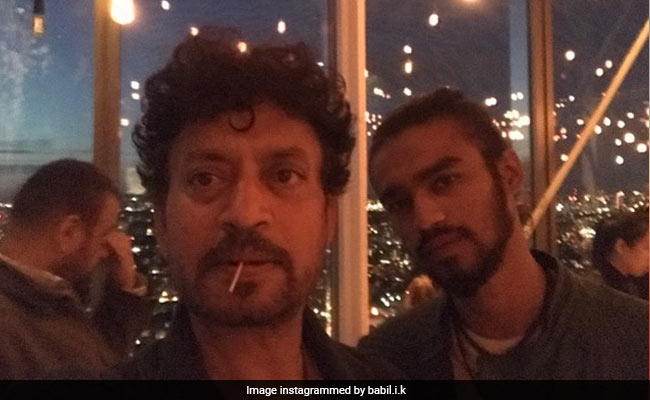 Irrfan Khan was one of the most loved and respected actors of Bollywood. He died of cancer at the age of 53 in Mumbai’s Kokilaben Hospital on April 20 last year. Irrfan Khan and his wife Sutapa Sikdar’s son Babil, in an interview with Film Companion, revealed one of the last things that the actor said to him in his final days. Irrfan Khan was admitted to the Kokilaben Hospital. “I was there in the hospital, two-three days before he died,” said Babil while talking to Film Companion’s Anupama Chopra during the interview and added: “He was losing consciousness and one of the last things he said…he just looked at me, smiled and said ‘I am going to die’.”

“And I told him ‘No, you are not’. He then smiled again and went back to sleep,” added Babil during the online interview, which he gave with mother Sutapa Sikdar.

Irrfan Khan was the star of films like The Namesake, Paan Singh Tomar, Haider, Maqbool, Piku and The Lunchbox. On Babil’s Instagram feed, you can easily find priceless memories of the late actor – some from his films while others from his quality time with his family.

Irrfan Khan was also remembered in the In Memoriam segment of the Academy Awards this year.

In the same Film Companion interview, Sutapa Sikdar shared that Irrfan Khan “never pretended.” Talking about “the most precious quality” about the late actor, Sutapa said: “He never pretended. If he is angry with you, or he is in love with you. The main thing is, when he is in love with you and says ‘I love you’, he did not pretend. He did not say it till he meant it.”

Irrfan Khan and Sutapa Sikdar’s son Babil is currently prepping for his first film. Babil will make his acting debut in Anushka Sharma-produced Netflix Film Qala, in which he co-stars with Tripti Dimri.

The PlayStation 5 India Restocks Have Come and Gone