Monday, June 27, 2022
Rajpostexam.com Single Spot For Worldwide Information And News
Home World What Record-Shattering Heat Is Doing To US Cities Children play in a riverfront water fountain during a heatwave in Portland, Oregon.

Portland hit a record of 115 degrees Fahrenheit (46 Celsius) Monday, as locations across the region notched new all-time highs. Seattle-Tacoma International Airport touched 108 degrees, while in Canada, Lytton in British Columbia set a new national record a day after shattering a previous high that had stood since 1937.

Avista Corp., which operates a unit providing electricity to about 340,000 customers across four northwestern states, said late Monday that it was taking the unusual step of temporarily shutting off power to some customers. Others were suffering from unplanned blackouts due to “heat overload,” the utility said.

The extended heat wave gripping a region usually defined by cool and rain is the latest example of searing weather around the globe as climate change drives temperatures to records. Moscow last week was its hottest since 1901, and the United Arab Emirates recently hit 125.

The Pacific Northwest warmth is building under a so-called heat dome. Kinks in the jet stream have pinned summer weather in place, leading to heat waves and drought, plus storms and flooding elsewhere — all underscoring the risks authorities expect to intensify through the season.

“It is unprecedented” to have temperature records in Portland and Seattle repeatedly broken on successive days, said Bob Oravec, a senior branch forecaster with the U.S. Weather Prediction Center in College Park, Maryland. “That just doesn’t occur.”

The relentless heat is already taking a toll on some infrastructure in the Northwest. Portland’s streetcar system was suspended after high temperatures strained wires. Seattle’s Sound Transit system said trains may operate at reduced speeds. And on the electric grid, transformers, the metal cylinders often atop utility poles, can malfunction and catch fire if they don’t cool at night.

“Our infrastructure is not prepared for temperatures over 110 degrees,” said Andrew Plambeck, public affairs manager at Portland Streetcar. 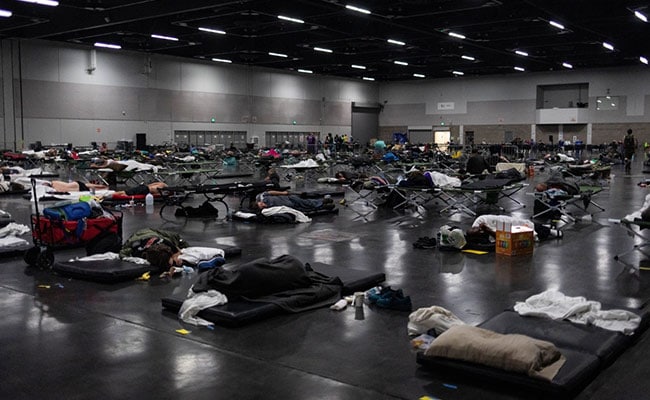 Residents at a cooling center during a heatwave in Portland, Oregon on June 28.

“People who are surviving outside may not have a safe place to be in the shade, to get access to water,” she said. “Dehydration is a huge, huge risk.”

An excessive heat warning is also in effect for Northern California, which is forecast to climb as high as 113 degrees. The state’s power grid operator has warned that it may need to ask for conservation to avoid rolling outages.

Hot weather ? will persist over much of interior #NorCal this week. The Delta Breeze will provide relief for the #Sacramento and #Stockton areas for most of the week. #CAwxpic.twitter.com/Rssb2VfyZR

The weather frying the Northwest also poured heavy rain across central states and will bring a heat wave to New York and the Northeast, with coming days in the 90s. Heat advisories stretch from Bangor, Maine, where humidity will make temperatures feel more like 100 or higher, down to Philadelphia.

The heat has triggered power grid warnings in the East. The operator of the largest U.S. grid, which stretches from Washington to Chicago, asked transmission and generation owners to suspend maintenance Monday across most areas. The neighboring Midcontinent Independent System Operator did the same.

Power and gas prices climbed across the U.S. Electricity prices at a Pacific Northwest hub for delivery over the weekend and Monday jumped 435% to $334.22 a megawatt-hour, data compiled by Bloomberg show. Some Southern California prices doubled from a day before. Even spot power prices in New England, Ohio and Pennsylvania jumped on Monday afternoon.

Meanwhile, U.S. natural gas futures rose for a sixth day as the heat wave in the Northwest raises power demand and depletes inventories.

Overnight lows in Oregon and Washington are topping highs elsewhere. Overnight temperatures will fall to 81 degrees in Yakima, Washington, while Houston will only reach 79 at the hottest point in the day, according to the weather service.