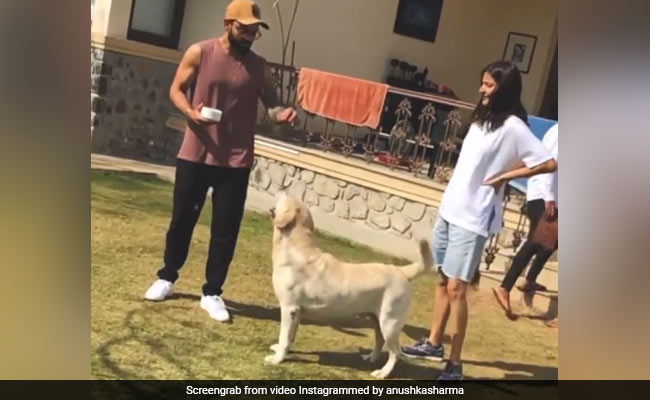 Caption – Anushka Sharma and Virat Kohli in a still from the video.Image courtesy: anushkasharma)

Anushka Sharma’s love for animals and especially dogs is known to all. She is often seen posting pictures of herself with her pet dog Dude on Instagram. But it looks like last year, the actress spent a lot of time with not just her pet dog but with many of the street puppies as well. How we know that? Courtesy, Anushka Sharma’s recent Instagram post. The 32-year-old actress recently dropped a throwback video featuring herself and her husband, cricketer Virat Kohli on Instagram. In the video, Anushka Sharma and Virat Kohli can be seen spending some “priceless moments,” with their pet dog Dude and some very adorable stray dogs. The video is a compilation of the moments that the couple spent with their dog and from the time when they stepped out to feed and play with the strays. Sharing the video on Instagram, Anushka wrote:”Some special, priceless moments from last year.”

Take a look at the video here:

The video received a lot of love from the fans of the couple. While some dropped heart emojis in the comments section of the post, others dropped comments like: “God bless you both.”

The video looks like from the time when the country was under a lockdown due to COVID-19 pandemic. During the lockdown last year, Anushka Sharma and Virat Kohli stayed at their Alibaug farmhouse. They constantly shared pictures and videos with their fans on Instagram during that time.

Check out some of these pictures here:

Anushka and Virat are one of the most followed celebrity couple of the country and they often send the Internet into a tizzy with their social media posts. Last week, the couple left all of us awestruck with a stunning video of themselves. The video that Anushka Sharma shared on Instagram seemed to be from a shoot set. The video features the actress sweeping his husband off his feet and too quite literally. Anushka can be seen lifting Virat with quite ease leaving him surprised as he uttered: “Oh Teri.” Sharing the video on Instagram, Anushka wrote: “Did I do it?”

Check out the amazing video here:

The actress-cricketer duo recently welcomed their first child, a baby girl named Vamika on January 11. Few weeks after welcoming Vamika, Anushka Sharma had shared a family picture featuring herself and her newborn baby on Instagram. The picture captured Anushka holding her baby girl in her hands as she smiles while looking at her.

Anushka Sharma and Virat Kohli got married in a private wedding ceremony in Italy on 2017. The wedding was a closely knit affair that only included couple’s near and dear ones. They later hosted a reception each in Delhi and Mumbai for their friends.