Shabana Azmi wrote, “At #Romesh Sharma’s 70th birthday party”, but forgot to add that it is a throwback picture 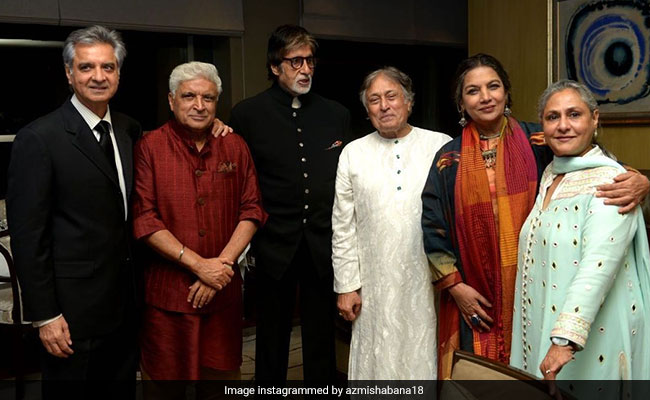 On Wednesday, veteran actress Shabana Azmi recalled meeting her friends from the Hindi film industry and her latest Instagram post is proof of it. The photo features Shabana posing with Amitabh Bachchan and Jaya Bachchan. Shabana’s husband and lyricist Javed Akhtar and musician Ustad Amjad Ali Khan are also in the frame. It was clicked at producer Romesh Sharma’s 70th birthday party in 2017. Romesh can also be seen in the picture. Shabana wrote, “At #Romesh Sharma’s 70th birthday party.” While it is an old memory that Shabana shared, she forgot to add in the caption that it is a throwback picture.

This prompted an Instagram user to drop a question in Shabana’s comment section. “Happy Birthday Romesh…All you ppl…what about the MASKS?” the Instagram user wrote. Shabana noticed the comment and apologised for not adding that it is a throwback picture. She wrote, “Sorry I should have said it is a throwback picture.” The user was enquiring about using face masks amid the coronavirus pandemic.

On July 29, 2017, Shabana had shared the same picture on Twitter. She also tweeted a few more photos from the occasion back then. “At #Romesh Sharmas 70th birthday celebrations yesterday. Elegant understated private.. a good time was had by all.”

At #Romesh Sharmas 70th birthday celebrations yesterday. Elegant understated private.. a good time was had by all pic.twitter.com/LacFA5ifS9

In another picture from 2017, Shabana can be seen posing with her “FTII buddies” Jaya Bachchan and Romesh Sharma. The photo also featured Danny Denzongpa. All of them studied at the Film And Television Institute Of India, Pune. Big B, Javed Akhtar, and Ustad Amjad Ali Khan are not there in this one.

In her tweet, Shabana shared that Romesh Sharma had “ragged” her badly during their FTII days. The actress added that he was her “first hero” in films. She worked with him in the 1974 film Parinay. “FTII buddies come together to celebrate Romesh Sharmas Birthday. He ragged me badly and was my first hero in Parinay,” her tweet read.

FTII buddies come together to celebrate Romesh Sharmas Birthday.He ragged me badly and was my first hero in Parinay pic.twitter.com/oBgY362FGV

Shabana Azmi graduated from FTII in 1973. She initially signed films Parinay and Faasla after her graduation, but actress’s first release was Ankur, which released in 1974.Parinay was also released later the same year.

Shabana has worked in films such as Nishant, Shatranj Ke Khiladi, Amar Akbar Anthony, Masoom, Arth and Neerja among others.