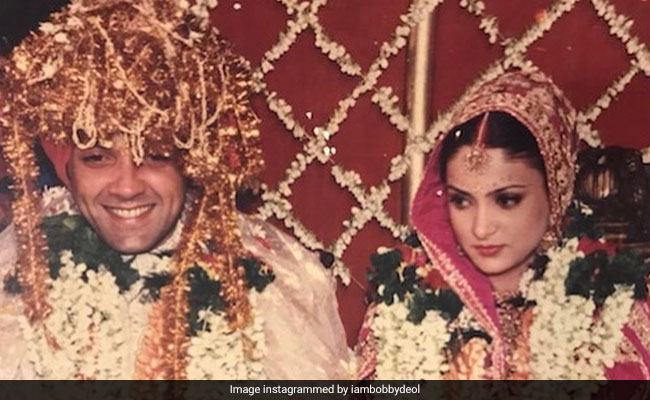 Bobby Deol and Tanya Deol are celebrating their 25th wedding anniversary today. Bobby has wished his wife Tanya a happy anniversary on social media. On Sunday, Bobby shared a few throwback pictures of himself with Tanya on Instagram. The collection also features some wedding pictures of the couple. In the first picture, Bobby can be seen hugging Tanya. In the second picture, Bobby as the groom and Tanya as the bride are flashing their beautiful smiles. In the third photo, the couple is performing their wedding rituals. The fourth picture was presumably clicked at a party in which Bobby and Tanya are happily posing together for the camera.

While it is a treat to see Bobby and Tanya’s pictures, his caption also deserves your attention. The Barsaat actor wrote a sweet note for Tanya in his post. He wrote, “My heart, my soul. You mean the world to me. Love you forever and ever. Happy 25th anniversary.”

On their 24th wedding anniversary last year, Bobby had posted a loved-up picture of himself and his wife Tanya on his Instagram handle. In his caption, the actor wrote, “Happy Anniversary my love #24.”

Actor Bobby Deol married Tanya Ahuja, a costume designer in 1996. The couple has two kids, Aryaman Deol and Dharam Deol. Bobby is the second son of actor Dharmendra and Parkash Kaur. Sunny Deol is Bobby’s elder brother. Bobby and Sunny have two sisters, Vijayta and Ajeeta. Actress Hema Malini is their stepmother. Esha Deol and Ahana Deol are their half-sisters.

In terms of work, Bobby Deol made his acting debut with Barsaat in 1995. He was paired opposite Twinkle Khanna in the film. Bobby has also worked in films like Ajnabee, Gupt: The Hidden Truth, Soldier, Badal, Bicchoo, Humraaz, Yamla Pagla Deewana and Housefull 4 to name a few.

Bobby Deol was last seen in the MX Player original web series Aashram in 2020 in which he played the role of Baba Nirala, a godman. He then appeared in the Netflix film Class of ’83 the same year. He now has films like Penthouse and Love Hostel coming up.