Madhya Pradesh Ram Navami Clashes: “If Muslims carry out such attacks then they should not expect justice,” Madhya Pradesh Home Minister Narottam Mishra told NDTV, accusing the community of rioting. 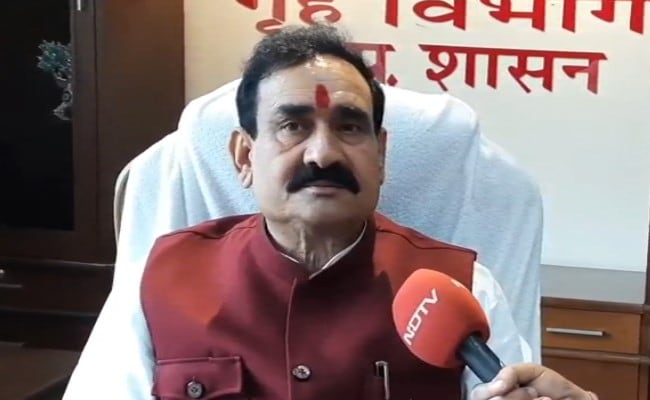 In escalating tensions over clashes during a Ram Navami procession in Madhya Pradesh’s Khargone on Sunday, the state Home Minister today directly accused Muslims of violence and rioting. He also defended the state government’s widely criticized move to demolish the homes of those who allegedly threw stones at the procession to mark the birth of Hindu god Ram.

“If Muslims carry out such attacks then they should not expect justice,” Madhya Pradesh Home Minister Narottam Mishra told NDTV, accusing the community of rioting.

He also said action would be taken against Congress leader and former Chief Minister Digvijaya Singh.

The state government, he said, is taking action against “rioters and encroachers”.

On Sunday, clashes erupted in Khargone in Madhya Pradesh when a Ram Navami procession was passing through a Muslim-dominated locality.

According to the police, stones were thrown at the procession after a row over loud devotional music played from loudspeakers. The police fired teargas shells to control the situation.

Many policemen, including police superintendent Siddharth Chaudhary, were injured. Four houses were set on fire and a temple vandalised.

“94 people have been arrested. The SP (Superintendent of police), who was shot, is better now. The boy who is on ventilator, is also better than before,” Mr Mishra said.

Chief Minister Shivraj Singh Chouhan has ordered the demolishing of “illegal buildings” of those involved in the stone throwing. Bulldozers were used to raze about 45 houses and shops. Around 16 houses and 29 shops were demolished on Monday.

Several opposition parties have protested what they call the use of bulldozers to target a community. In neighbouring Uttar Pradesh, Chief Minister Yogi Adityanath was praised as “bulldozer baba” in the recent BJP election campaign. Madhya Pradesh votes next year.

Asked why the administration had launched action against those accused of violence without any due process of law, Mr Mishra said: “Those who can be seen on camera throwing stones, these are not just allegations. We are following due process and they are going to jail,” the minister said.

On the demolition of homes targeting entire families even if only one member has been accused of throwing stones, the minister said: “Those who were injured also have families. Why did they not think before doing what they did, using weapons?”

Defending the demolitions, Mr Mishra said action was being taken only after it was established that the property is illegal.

The minister denied that Muslims were being targeted by his government.

“What anyone is saying in their defence is different. The basic point is who attacked.”

The Madhya Pradesh government has been accused of favouring one community, the minister was asked. “If anyone triggers rioting in Madhya Pradesh they will be crushed,” Mr Mishra said.

Why were all those accused of riots from the Muslim community, the minister was asked. “But who did the ghapla (offence)? You are not talking about that?”

Mr Mishra also said action would be taken against Congress leader Digvijaya Singh for his post on Twitter alleging that saffron flags were put up at a mosque on the same day as the violence. The photo, the state government said, was not from Khargone but was an old image from Bihar. The Congress leader later deleted the tweet.

“We will take action. What Digvijaya Singh tweeted went viral. This is not the first time and it is a very serious issue,”Mr Mishra said.