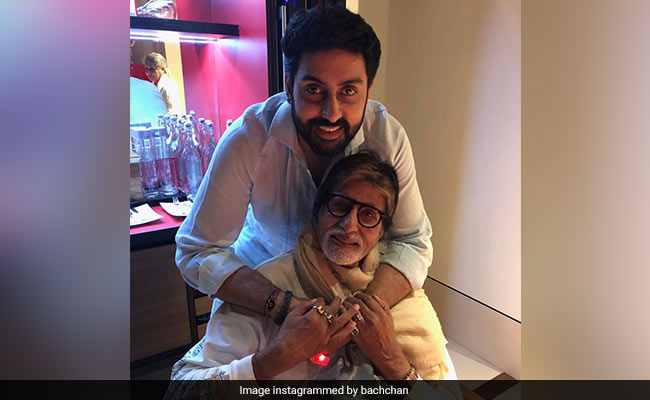 Amitabh Bachchan is a “proud” father as his son Abhishek Bachchan’s recently released film The Big Bullbecame the biggest opener of the year on Disney+Hotstar. The Big Bull, which is loosely based on that of stock-broker Harshad Mehta who was charged for numerous financial crimes during the securities scams of 1992, features Abhishek Bachchan in the lead role. On Thursday, sharing a tweet where Abhishek Bachchan announced that his film, directed by Kookie Gulati, has become the “biggest opener of the year” on the OTT platform on which it premiered on April 8, Big B wrote: “WHTCTW… well done buddy… pride of a father… when the son starts wearing your shoes then he is no longer your so… he is your friend… so well done buddy!” In another tweet, Amitabh Bachchan gave a big shout out to his son like this: “The pride of a Father…The Big Bull, biggest opening.”

T 3876 -Amitabh Bachchan
WHTCTW .. well done buddy .. pride of a Father .. when the Son starts wearing your shoes then he is no longer your son .. he is your friend .. so well done buddy !! . .. PKRD pic.twitter.com/VYuDUegJ8w

After The Big Bull released on Disney+Hotstar, Amitabh Bachchan watched it and reviewed it like a father. He wrote in his blog, “For a father it is ever a moment of great pride to see their ‘progress report’ prosper and do well … I am no different from any other father. The mention of such always brings emotion and tears, particularly when there is an exhibition of immense value… So, despite the fact that The Big Bull had been seen privately within the confines of the home much earlier, the excitement of watching it when the entire world shall be seeing it at the same time, was different.”

Recently, Abhishek Bachchan’s acting in The Big Bull was called “3rd rate” by a Twitter user, who also compared the film to the web-series Scam 1992, in which Pratik Gandhi played the role of stockbroker Harshad Mehta. In his savage reply to the troll, Abhishek Bachchan wrote: “Hey man, as long as I’ve not disappointed you, I’m happy. Thank you for taking the time out to see our film.”

Hey man, as long as I’ve not disappointed you, I’m happy. Thank you for taking the time out to see our film.

Priyanka Chopra’s Easter Celebrations Summed Up In A Pic

Over 1.84 Crore Covid Vaccine Doses Available With States, More On...