Sara Ali Khan captioned the snaps as, “Hakuna Matata- it means no worries.” 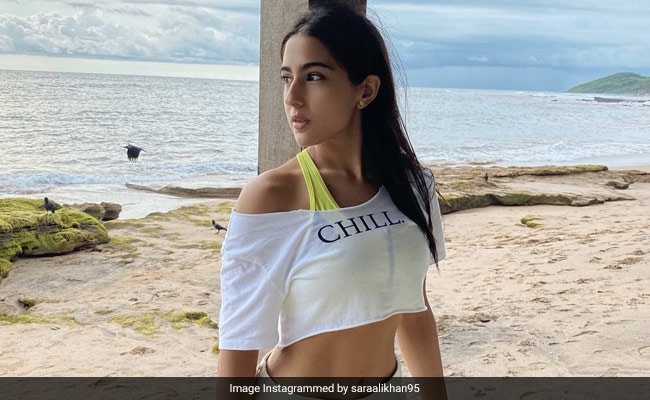 Sara Ali Khan is here to give fans major vacation goals. The actress recently posted a couple of pictures from her trip to an undisclosed beach location. Sara captioned the snaps as, “Hakuna Matata- it means no worries.” She also matched the mood with an off-shoulder crop top that had ‘chill’ written on it. Sara paired this with a neon green sports bra and distressed denim shorts. Fans reacted with fire and heart emojis.

The 25-year-old, earlier, made fans stop and look at her appearance in fashion designer Manish Malhotra’s video, Nooraniyat. She turned into his muse Noor for this edition that showcased Manish’s bridal collection. Sara sported royal couture for this themed video. A fan, who was bowled over by Sara’s beauty, wrote, “You as a bride is so beautiful.” Another said, “Royalty at its peak.”

Sara recently met Telugu superstar Vijay Deverakonda and the Liger team for an evening party. In the snaps shared by Charmme Kaur, we could also spot Karan Johar, Puri Jagannadh and Manish Malhotra. However, the female lead of the movie, Ananya Panday, was missing from the frame. “When art brings artists together, this is what it looks like,” read the caption.

Sara was last seen in David Dhawan’s Coolie No 1, alongside Varun Dhawan. Next, she is gearing up for Aanand L Rai’s film, Atrangi Re. The actress will share the screen space with Akshay Kumar and Dhanush. The film’s music is being composed by AR Rahman. The makers have decided to release it on August 6.